Health promotion can be defined as the process which helps in improving their health. It moves around the individual’s behaviour for the wide range of environmental and social interventions. In this essay, the topic which is chosen regarding the health promotion is Obesity. It is important to promote health and education in the family, youths and children's care (Seo & Park, 2010). The health promotion concept is built on cultural and social understanding of illness and health. Health promotion helps people to increase control on health by inter sectoral and advocacy action. Promotion and health education both aims to improve access to information and service related to health, it also provides information in relation with various diseases in the community. People who are better informed and educated have better information access about illness.

Current health condition of the indigenous families regarding obesity is based on various factors. The creation of the obesogenic environment ( factors that make people obese and overweight), is applied all over in UK, but situation becomes complicated for many indigenous groups who are from different social, geographical, infrastructure and economic background. Effect is regarding availability and choice of food. (Papini, 2015). With different aspects of indigenous health, historical, social, economic, geographical and infrastructural factors contribute in the obesity and overweight among indigenous people, but it has analysed some genetic factors which also contribute in it. Traditional population who had hunter gathering lifestyle has developed the insulin for resistance to give response to 'feast and famine' conditions. In the environment where the food is abundant and physical activity is less, thrifty genotype will lead to rapid gain in weight, diabetes and obesity.

As nurse in the community health setting, I have analysed various issues that have impact on health of indigenous families. There are many families who are the part of obesity and overweight, and are suffering from many health problems in context with this disease. Overweight and the obesity can be defined as the excessive or abnormal accumulation of the fat which will affect health. It can be diagnosed in adults with the help of Body mass index (BMI), which is a simple index for measuring weight and the height (Seo & Park, 2010). People are considered as obese when their BMI is over 30 kg, in the range of 25-30 kg it is defined as overweight. Obesity is a type of medical condition which describes the excess body fat. Obesity is generally caused by excessive food intake, genetic susceptibility and lack of physical activity. Obesity can be prevented by combination of personal choice and social change. Change in the exercise and the diet are the main treatments.

According to Aguirre, (2010) there are different issues in relation with health of the people regarding the obesity and these issues should be taken into consideration to gain the knowledge and understanding regarding the obesity which will help to identify the cause of the disease. Arora, (2015) says that at the individual level, excessive food intake and lack of physical activity explains the most cases of obesity. It has been reviewed that insufficient sleep, increase use of medications, environment pollutants, decrease variability in temperature, epigenetic risk factors, natural selection for high BMI all contribute in increase of the obesity. Some of the issues are as follows:

Diet: It is considered as the main factor in the obesity which impacts the health of the indigenous families. Dietary energy supply per capita differentiates between different countries and regions. The United States is having the large amount of availability of people with 3654 calories per person. Magnussen, (2011) says that total consumption of food is in relation with the obesity. If there will no proper diet in relation with health of the people, then it will definitely cause obesity. Extra food energy comes from increase in carbohydrate rather than consumption of fat. The primary source of the extra carbohydrates is the sweetened beverages and potato chips.

Sedentary lifestyle: As per Pfalzgraf, (2013) this plays a main role in the obesity and affects the health of indigenous families. World has been shifting towards physical work and currently 30% world population is getting insufficient exercise. This is because there is an increased use of mechanized transportation. In children there is decrease in the physical activity because of less physical education and walking.

Genetics: Obesity can be defined as the result of interplay between environmental and genetic factors like other medical conditions. Polymorphisms in different genes control appetite and the metabolism to obesity when there is presence of sufficient food energy. The various differences in BMI between different people because of variable genetics depend on the population. It is a main feature in the several syndromes.

Other illnesses: Mas, Allensworth & Jones, (2010) says that different medical and physical illness and the pharmaceutical substances which are used for the treatment may increase the obesity risk. Medical illness which will increase the risk of the obesity include various rare genetic syndromes and various acquired and congenital conditions like growth hormone deficiency and many more and various eating disorders like night and binge eating disorder. As per Papini, (2015). the risk of obesity and overweight is high in patients having psychiatric disorders in comparison to person who are not having psychiatric disorders. Certain medications also cause the gain in weight and change the body composition which may like some hormonal changes.

Social determinants: The influences related to genetics are important to understand the obesity, but they will not be able to explain the reason for dramatic increase globally. From this, it is accepted that the excess consumption of energy leads to  obesity. Magnussen, (2011) explains that the relation between the BMI and social class varies from country to country. It has been reviewed that high social class women are less obese and but no difference is found in the men from different social class. In today's developing world, men, women and children of high social class has great obesity rate.

Gut bacteria: The study in regards with the impact of infectious agents on the metabolism are in its early stage. Gut bacteria which form the community of the microorganism are present in the digestive system of animals and the human. In human it has the high number of bacteria and the large number of species. Mabaso-Motlatla, (2012) says that it has been used to make differentiation between obese and the lean humans. Gut bacteria among the individuals affect metabolic potential. The collaboration between the obesity and the viruses are there in humans and various species of animal.

These are various key issues which affect the Indigenous family’s health and it should be taken into consideration so as to know the related causes which are creating obesity among the individuals. As a nurse of the community health setting, it is analysed that obesity is increasing day by day among the individuals and the children and it is very necessary to take appropriate actions in regards with precautions of the disease (Factors contributing to Indigenous health. 2017)

Running on a Low Budget?

There is increase in obesity and overweight in the community and the indigenous families. From the analysis, it can be recommended that the health professionals of the community should communicate effectively and properly with indigenous families which will help in promotion of the strategies which are in relation with  health care. Firstly, the health care professionals should listen carefully and understand the problems of the patients so as to provide them good treatment. Effective and efficient training should also be provided which will help in increasing the effectiveness of professionals for treating the disease. Primary health care model can be used for promotion of health care which can be like: 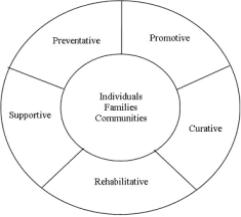 From the above analysis it can be concluded that the education and health promotion is the key factor to make people aware about disease. Obesity and the overweight is very common disease which is increasing day by day in indigenous families. There is a problem in relation with the diet, genetic order, gut bacteria and various other illnesses which will cause the obesity and have impact on health of the indigenous families. It is recommended that the professionals of health care should take proper care and should increase communication to know about such disease which will help to improve individual's health. and what HIV/Aids and its Impact Social Discrimination.