One of the main reasons of climate change can be attributed to the conduction of unsustainable activities undertaken by various industries operating across the world in various economies. One of the most significant contributors to climate change is the emission of Carbon Dioxide which is produced by different countries on a large scale. Carbon Emissions are mostly caused due to a continual burning of fossil fuels such as Petroleum, Natural Gas and Coal among others over a large period of time. In the context of given case scenario, data regarding Top 15 Producer countries has been extracted from a report named,EDGAR: Trends in Global CO2Emissions: 2014 and has been presented as under:

Based on these figures, the following graphical representations have been presented in part (a) and (b) with critical commentary on the same provided in part (c): 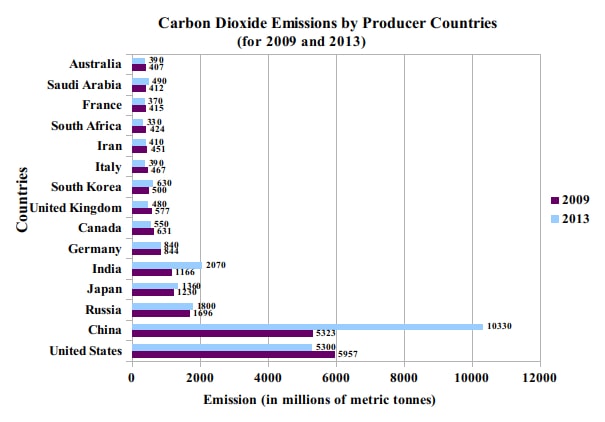 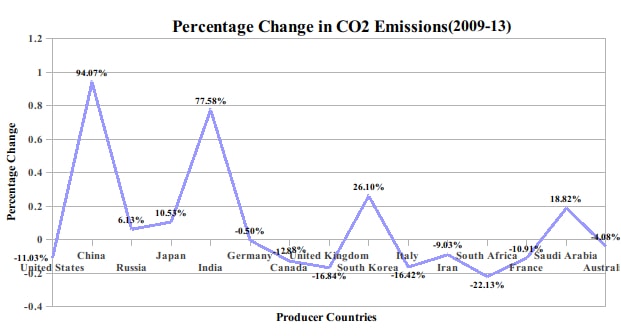 Part (a) provides a graphical representation of CO2 Emissions in a comparative format. For this purpose, column (A) to (C) of the aforementioned dataset has been taken into account. This mainly relates to the producer countries and their emission values, measured in millions of metric tonnes for the years 2009 and 2013. By analysing the chart in part (a), one can easily get a comparative idea regarding how the emission of Carbon Dioxide has increased for each producer country between 2009 and 2013. Here, a Bar Chart has been chosen as the most appropriate graphical representation technique as it enables the user to easily observe the bars and get an overall idea regarding the changes in CO2 Emissions. Based on this graph, one can see that the top three contributors of emitting excessive Carbon Dioxide in the environment pertain to China, USA and India respectively. China produced 5323 million metric tonnes of CO2 in 2009 which increased to 10330 million metric tonnes in 2013 which is the highest amount of Carbon Dioxide any country has ever emitted. This means there is a 5007 million metric tonnes rise in their emissions. It is interesting to note that while China continues to lead this list, USA and India have a rather opposite trend. For instance, USA has taken some serious measures to control its overall CO2 emissions over the years, even though it manages to rank second among all the other producer countries of this list. Conversely, India has significantly increased its overall emissions of Carbon Dioxide between 2009 and 2013. Thus, indicating that there are hardly any significant control measures taken in this regard. Additionally, it is also important to take note of the fact that there is a possibility of non-compliance with environmental standards or implementation of control measures which are largely ineffective in nature as this can also lead to rise in overall Carbon Emissions as can be seen in the graph presented in the part (a) of this question. On the other hand, South Africa seems to be the lowest contributor of such gases with a decline of 94 (=424-330) million metric tonnes between 2009 and 2013. Also, many other countries such as Canada, Australia, France, Italy, Germany and Iran among others have attempted to control CO2 emissions between this period.

Part (b) provides a graphical representation of CO2 Emissions in a manner which facilitates the depiction of percentage change in carbon dioxide emanation for top 15 producer countries of the world. For this purpose, column (A) and (D) of the aforementioned dataset has been taken into account. By analysing the chart in part (b), one can easily get a clear idea regarding in what percentage has emission of Carbon Dioxide increased for each producer country between 2009 and 2013. Here, a Line Graph has been chosen as the most appropriate graphical representation technique as it enables the user to easily observe the highs and lows for each country within the stipulated time period. Here, again, China has experienced a sharp hike of 94.07%, followed by India at 77.58% rise in CO2 Emissions between 2013 and 2009. The maximum decrease in such activity is recorded for United Kingdom which has recorded a low of 22.13% over the years followed by United Kingdom at 16.84%. The least amount of change in emissions has been recorded for Germany which was only able to control its overall carbon emissions by a mere 0.50% followed by Australia at 4.08% between 2009 and 2013. Thus, indicating that China remains rather ignorant of the fact that whether or not its carbon footprint within an international context remains massive as it has nearly doubled its emission by 2013 while countries such as Germany, South Africa, Germany and United Kingdom are trying their best to control carbon emission in the ecosystem so as to prevent Climate Change on a large scale.