The aim of this study was to measure the effects of two different dressing materials over patients undergone hip replacement surgery (Harle, Korhonen, Kettunen and Seitsalo, 2005). This study produced quality results by conducting randomized clinical trials over the two groups of patients. The study addressed the aims effectively by selecting 100 patients including both men and women.

It effectively concluded that hydrofibre dressing and polyurethane film material is better in terms of its effects over wound of patients rather than conventional wound pad and fixation tap. Under the study, results were attained through quantitative research which made the findings validate and authentic.

It also effectively presented that status of hospitals in terms of their guidelines for dressing, which reflect the loophole of hospital management.So, it can be said that this study effectively achieved its results of measuring impact of dressing material on wound. 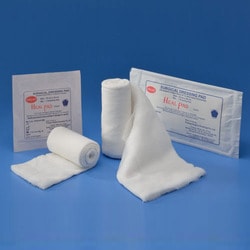 Randomized clinical trial was used as research methodology in this research. In this study, both men and women were chosen as participants for data collection. These patients were from Orton Orthopaedic Hospital. Harle, Korhonen, Kettunen and Seitsalo (2005) stated that patients were categorized into two separate groups namely A and B.

In group a, hydrofibre dressing and polyurethane film was used. On the other hand, in group b, conventional wound pad and fixation tap was used wound material. Under this study, economical and clinical effects of two dressing materials on patients undergone hip replacement surgery were measured. It can be said that this methodology was appropriate and fit to the context of research that is clinical.

In this research study, sample size was 100 successive patients, who were selected through convenience sampling (Harle, Korhonen, Kettunen and Seitsalo, 2005). Convenience is the form of non probability sampling that selects people, who are accessible and within the proximity of the researcher (Black, 2011).

Cost of dressing material of group A proved higher (€14.70) in comparison of group B (€8.70). It is also observed in the results that at initial level, several skins related problems were marked in group A, but after the change of dressing, these problems were cured.

In addition, changes of dressing on skin were also effectively presented in tabular format in the results of this research that reflect the effectiveness of data presentation. As per these results, it is explored that changes at first dressing and changes after first dressing were measured between group A and group B respectively

. Harle, Korhonen, Kettunen and Seitsalo (2005) found that an around 5% patients belong to group A were reported to have skin injury in terms of blisters after the first change of dressing material. In contrast, in group b, blisters were reported among 15% patients that were higher than their counterparts.

In this section of research study, it can be stated that consistency with results and measures was effectively performed (Machin and Fayers, 2010). It can be interpreted that as like of results, it is stated that patients of a group also faced several skins related issues initially, but after the change of dressing, these issues were resolved.

It can be stated that use of hydrofibre dressing material reduced the issues in terms of mechanical skin injury and need of changing the dressing material on frequent basis. It is also stated in the clinical guidelines of NMC that hydorfibre is good dressing material (Magill, Yeates and Longley, February 2010).  Furthermore, it is also found that in the wound healing follow up, most of patients reported skin related injury.

So, it can be stated that this is the main weakness of the study, as the results could have been developed in more validate way, if these factors were explored in the research.

In discussion, some weak areas of hospital authorities were also found and discussed. Under these areas, it is claimed that hospitals do had any guidelines to treat skin associated injuries. On the other hand, health institutions like NICE have set their guidelines effectively to avoid any lacking (Minimally invasive total hip replacement, 2012).

Monitoring Human Body Fat The human body is made up of two components known as fat mass and lean body mass. Although, fat is required by the human body to survive, excess of it poses several risks and harms for an individual. It is for this reason that greater importance has been assumed by

Introduction Medical imaging may be served as a technique which lays emphasis on creating visual presentation of body. It includes clinical analysis and medical intervention which in turn helps in assessing cause of issues which prevail in the body of individual. Medical Imaging

Introduction Adverse events depicts errors and mistakes in the process of medication which causes injuries and problems to the person. Thus, in such respect the present research study has been describing the impact of adverse event on the patient. The entire study has been conducted on the basis

Introduction to Human Biology According to the generalised system, human biology is regarded as an interdisciplinary area of study which examines the humans through considering genetics, anatomy, nutrition and other influences. Thus, in this respect the present research study has been made for the

Oncology :  Diagnosis & Medical Treatment of Cancer  Chapter1 : Introduction What is oncology? The term oncology basically means a branch of science that deals with cancers and tumors. The word oncology is composed of two words onco meaning bulk/mass/tumor and logy meaning study

Improving Patient Experience In The Area Of NGT Sample

INTRODUCTION OF NURSING DEVELOPMENT PROGRAM I am using Gibbs’ reflective cycle as the framework for this assignment. I am going to discuss cardiovascular care of patient experiencing anaphylactic shock. According to NICE clinical guidelines, anaphylaxis is a severe, life-threatening,