5 Scientists Who Regret Their Great Inventions

Five Inventors Who Are Sorry for Their Creations 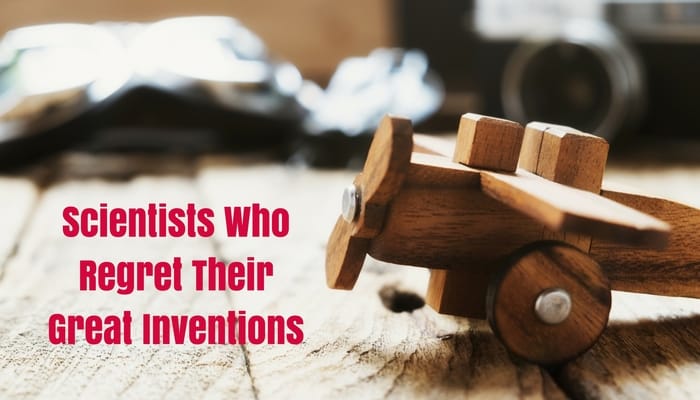 Have you ever wondered about the importance of an invention in the life of a scientist? If you think developing something out of scratch is a cakewalk, then you are highly mistaken. Great discoveries require blood, sweat, and tears. There are people spend their whole life working on a single project, whereas some are quite ingenious that they have many patents on their name. They are too much attached to their inventions that they get heartbroken when they see their discoveries or design are being misused. In this blog, our assignment help experts have enlisted a few of such cases where scientists are sorry for their creations. Take a look!

Alfred Nobel, a Swedish chemist, is well known today as the founder of the Nobel Prize. His commitment to this award was born from his best known invention called ‘dynamite’ which was patented in 1867. He created this explosive to put an end to the war, not to start it. He believed that once it was used in any war, the destruction caused would force all civilized nations to recoil and disband their troops. Sadly, this didn’t happen. As the armies realized the potential of dynamite explosions, its use in the war caused countless deaths. Nobel was heartbroken by that as he didn’t want his legacy to be a disaster. That’s why he devoted his complete wealth to the establishment of the Nobel Peace Prize.

Arthur Galston, an American botanist, devoted his life to plants growth. He synthesized Triiodobenzoic Acid (TIBA), a hormone that paced up the flowering of soybeans, but will defoliate them if it is used in higher concentrations. But, his invention was further used to formulate a chemical weapon named as Agent Orange. During the Vietnam War, the US army used it to destroy enemy’s crops and natural vegetation in Vietnam. But, its consequences were more severe as hundreds of thousands of children were born with birth defects and lifelong health problems. Galston felt bad that his research was used that way.

We have read about Einstein’s regret about the atomic bomb, but he wasn’t involved in its development. The credit goes to J. Robert Oppenheimer, an American theoretical physicist whose research area was black holes, but the World War II turned his focus to develop an atomic bomb as a way to end it. This further resulted in the creation of the world’s first hydrogen bomb ‘Trinity.’ It consisted of 18,000 tons of TNT and exploded with a tremendous magnitude. He said that he could never forget the outcome that remained in his memories forever, and would disappoint him for the rest of his life.

We know that Airplane was invented and flew by the two Wright brothers: Orville and Wilbur Wright. While both of them spent their lives in advancing the aviation technology, neither expected that their invention could ever be used in war. In 1909, the US army purchased their planes for observation purposes. But, they were later used in WWI. After seeing the mass destruction caused by their inventions, Orville Wright said “We dared to hope we had invented something that would bring lasting peace to the earth. But we were wrong.”

During his service in the army, Mikhail Kalashnikov came to know how ineffective and dangerous rifles soldiers were forced to use. He combined his keen interest in weapons with the deep knowledge to design an advanced gun “Avtomat Kalashnikova Model 1947” commonly called the AK-47. Being the world's cheapest, effective, and prolific combat weapon, it brought him pride and gave him the hero status in Russia. Unfortunately, when he saw that his invention became an instrument to spread terror worldwide, he wished that he would have made something more helpful than this.

They say technology without hatred can be a blessing, but when hatred is added to it, a disaster occurs. Here, you have just seen a small part, but the list of such great scientists is too long. Hope this blog was informative enough.

If writing lengthy assignments bothers you a lot, then hire us to prepare your documents. We, at Instant Assignment Help, have an experienced team of excellent writers and academic experts who provide the best online assignment help to scholars at reasonable prices.