Get Assignments at the Lowest Price Guaranteed

The ERP or Enterprise Resource Planning is that procedure through which organisations use to link and manage all the significant business processes. The business processes can be defined in simple terms as different departments that are existing in the company, which includes accounts, Human resources, marketing, manufacturing, production etc. Through the use of ERP, the business organisations use to have the facilities of convenience, adaptability and consistency among all the departments and functions. Basically, the ERP is based on a software system which use to provide required information and makes all significant data located centrally at one place (Velcu, 2010). The present report has focussed on ERP system and its process of implementation in business organisations. The ERP system and its implementation process in two companies OilCO and ExploreCO has been discussed. Both oil companies are located in Australia. The former one is a refiner and merchant of petroleum while later one is oil and gas production firm. The report will discuss on various implementation issues and factors that contributed in success of projects. Finally, the report will have conclusion and recommendations on the basis of findings contained in report.

The evolution of ERP system was based on need of organisations so that each department can easily access the informations among different departments. The ERP system is basically composed of different elements which are hardware, software, processes, information and people. The hardware refers to various tangible and physical components like servers. Software refers to different programmes which are used for operating various applications on devices. The very popular software examples can be Windows, Linux etc. The processes are composed of different policies and procedures which are used for carrying out business. The informations are all data and knowledge concerned with different topics and helpful in creating in-depth analysis (Dezdar and Ainin, 2011). While the people in ERP will be all users of system which can be either employees or employers. This is evident that ERP are based on different architectures which is mainly focussed by implementers. The system's architecture is designed on logical and physical basis. According to logical architecture, the system is designed on customisation basis to fulfil the needs of end users. On other hand, physical architecture is designed to increase the efficiency of ERP.

1.1 Issues related to implementation of ERP

The ERP systems as discussed above have two types of architecture where one is logical and other one is physical. The package driven system of ERP is based on physical architecture and also known as Vanilla architect. On other hand, the chocolate architecture refers to logical one where designing is based on customisation process (Maditinos, Chatzoudes and Tsairidis, 2011). The implementations done on the basis of physical architecture are comparatively faster and also less costly. But the major drawback is, it does not fulfil the purpose of business organisation's processes. The results obtained from logical architecture is far better than physical ones but this is the expensive one and also consumes more time. Another point which makes it somewhat less preferable is the up gradation of system which is a difficult process.

It is recommendable that the for implementing the ERP systems, it is necessary to make required preparations. For this purpose, a committee can be set up by the companies so that they can develop plans and share necessary information to process the implementation (Lee and et.al., 2010). The OilCO was aiming to make improvements in the current system of their ERP so that their integration and automation process can be improved. Besides this, the said firm also set the objectives of making improvements in customer service and assist in the reconstitution of their business plan. For this, the OilCO adopted mainframe computer based ERP approach which helped the organisation to enhance the performance level tremendously. It helped in centralising all the information about business processes that were expanded in different parts of world at one place.Likewise, the other company of ExploreCO is decision about the best option which they can adopt for ERP. They have the option of either upgrading the current system or replacing it completely with a new one. But finally they decided to replace the system as the up gradation needs a lot of money and energy to configure (Kale, Banwait and Laroiya, 2010).

The implementation strategies that can be adopted by companies are Phased roll out and Big bang plans. Both strategies have some benefits and drawbacks as well. The major issues that can be faced at the time of implementing the strategies are related with expenditure, time and scope. As per this, the plans are made which are based on comprehensive integration, middle of road and vanilla plan. The first plan is based on ensuring the functionality of implementation but it is highly expensive and takes much time. The second one is less expensive but less purposive and does not make any clear strategy for implementing. The last one is comparatively more preferred as it minimises re engineering processes. The strategy of Big bang implementation is good as it takes lesser time in implementation (Top 10 ERP Implementation Strategies. 2015). Besides this, the cost involved for ERP implementation as per the said strategy is also cheap. While on other hand, the risk factor is more in this strategy as any failure due to some circumstances, the further systems may also generate problems. Similarly, the phased roll out system is less riskier than Big bang strategy. In addition, it also give opportunities to gain different skills and experiences at each stage of phase. This makes an ideal implementation strategy. However, this strategy also bear some disadvantages where time taken to be converted is more in this plan. Besides this, the mentioned strategy is not much focussed as Big bang. 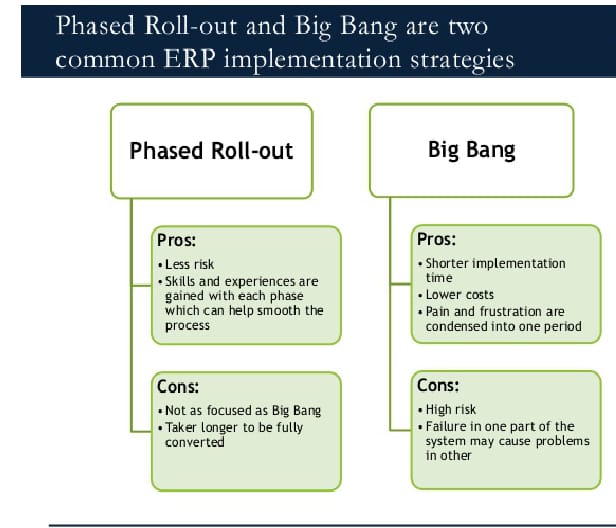 The strategies adopted by both the companies gave different outcomes because of which it is clear that the implementation plans should be made with great care so that the organisation can get desired results from ERP system.

1.2 Similarities and differences between implementation of both companies

The Explore CO and Oil CO has used different ERP strategies for implementation as per their need and plan. As mentioned above, the Oil Co adopted the most complex implementation which was based on mainframe ERP solutions. According to this implementation, various changes were made in processes so that it can match with the ERP processing method. Besides this, it also helped in maximisation of benefits through integration process with correct matching of existing business process. The plan also included the module of development which involved developments as per oil industry specific models (Nour and Mouakket, 2011). The implementation process adopted by Explore CO was inspired from Oil CO. for this purpose, at first stage different cost analysis was done. According to that the scope was set and recommendations were given. The head of a project was fixed and given a name of Project Champion.

Both companies adopted there implementation process in their own way but there were some similarities in them along with several differences. As per the above discussion the similarities in both implementation process exists in the adoption of CSFs or critical success factors. This helped in proper implementation of ERP process for both firms. Both enterprises focussed on inducing minimum changes in the software and major changes in the business process so that desired objectives can be achieved in right manner (Pabedinskaitė, 2010).

The major difference that two companies had in their implementation process is discussed in following table:

1.3 Factors that made the project successful

The projects were successful through their implementation of ERP processes. Several benefits were gained by both firms due to the right implementation processes they adopted in the ERP system. Processes embraced by Oil Co gave positive results and the organisation made considerable amount of profits. The firm became able to forecast better about sales volume, the automating process for order and delivery was also improved and the financial data was retrieved in more easier manner. Besides this, reforms were made in data and business process because of which it became more smooth and efficient. Similarly, Explore CO's project was more focussed due to which scope of budget was also better. The expenses were less and project completion time was also little (Peng and Nunes, 2010).

The factors through which both firms made a good progress and were right methods of implementation also implementation of CSFs. The two organisations had same CSFs with a slighter differences which gave positive consequences. The Explore Co adopted a project champion who had a specific roles and responsibilities towards the implementation of ERP. While the same was not with Oil Co. the role of project champion was not given to any particular person and persons use to change timely. Besides this, they also adopted the policy of minimal customisation with adherence to dates of delivery. Oil CO also considered the important factor of industry specific module which helped in achievement of set objectives. Besides this, the governance structure of both firms was also in better position which helped in proper implementation methodology (Velcu, 2010).

1.4 Learning from the case

The case clearly depicts that success of implementation process is completely dependent on CSFs adopted by companies. The implementation methodology should be followed in proper manner so that the results can be achieved positively. Apart from this, it is also evident that the project managers are key factors for success in the industry. Further, it is necessary to have a right governance structure so that the delivery times can be followed appropriately. As the Oil Co was not having proper project champion, the decision making was affected largely which resulted in expanded time for completing the project (Lee and et.al., 2010).

The report on ERP presented here depicts various essential requirements that helps in making the process of implementing easier. The ERP refers to various processes that are related with connecting assorted and significant procedures of a business. The two companies have been taken in present study, the Explore CO and Oil CO and both were successful in their aims with the help of correct methodologies. The Oil co has adopted a vast and complex structure for implementation while the Explore CO's plan was based on Oil Co structure. The CSF's of both organisations helped in carrying out the implementation properly along with greater success. Moreover, the enterprises used available skills and experiences for their work which helped in alignment of corporate objectives with the implementation process. Also it is found in the case that the system and procedure used by Explore CO was better than Oil CO as it used more systematic method.

Please put your valid email id.
Instant Assignment Help is a renowned academic writing service provider that is committed to provide the best writing assistance to students around the globe at budget-friendly prices. Hundreds of students reach to us every day and ask for help with writing their assignments, dissertations, theses, case studies, essays, and other academic papers. Moreover, they seek our experts’ advice in choosing the best topics, structuring ideas, collecting relevant data, and revising their papers. Once you avail our writing services, you will notice a huge difference in your grades!
Most Downloaded Samples
View More
Free Features

Get all these features for £121 FREE

This Website Uses CookiesWe use cookies to ensure that we give you the best experience on our website. We have updated our privacy policy in compliance with GDPR. If you continue to use this site we will assume that you are happy with it Read more

Price Calculator
× Due to the impact of COVID-19 outbreak on economy, we are dropping our prices by upto 50% to help you. You can also face slight delays in response time of call answering, chat support and email replies but no delays in assignment deliveries