According to the topic the present report is divided in two parts. First part included the analysis of country and for this India has been chosen. In this part GDP, earning yield, price level, currency appreciation or depreciation are evaluated. And the second part explains the analysis of industry, for this retail grocery has been taken. In this market structure, characteristics of demand and its elasticity, features of costs, pricing strategies, structural barriers to entry and entry decision have been explained. 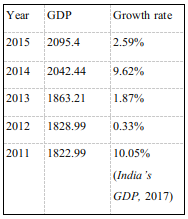 At the time of inflation the price level increases.

2. Characteristics and elasticity of Demand

3. Features of costs, Economies of scale and Pricing strategies

Variable cost:- Variable cost changes according to the per unit production. It varies from number of units produced like raw material cost, labour cost etc (MaCurdy, 2015).
Fixed cost:- Fixed cost do not change according to per unit production. It has to be incurred at any number of production like rent of building.
Importance of Economies of scale:- Economies of scale is important for those firms where large number of units are produce with less or average input cost (Dickens, Riley and Wilkinson, 2015).
Pricing strategies:- Pricing strategy is completely depends upon the company's goals and objectives. Price discrimination is come under micro economic price strategy, in which different prices are offered by identical or largely similar sellers of goods and services (Schmitt, 2013).