Trump victory impacts on Malaysian market and their economy

1. Impact by TPPA: Malaysia is one of the leading economy of the world approx. $815 billion and their GDP growth rate is 5 percent which is quite goods as compare to other Asian nations. They export billions of dollars’ product and services to US which contribute 8.7 percent of total export. But after Trump administration and its signal to break Trans Pacific Agreement having a huge impact. Because annually approx. $10 billion which provide large amount of foreign capital and jobs (Afonso, Furceri and Gomes2012). It can lose the trade which directly hit its jobs and foreign currency reserve. According to trans pacific agreement there are 14 major countries who made a agreement between them through which they can apply a free trade between each other (Alfaro and et.al ., 2010).

2. Imbalance on economy: Malaysia's exports increased by 13%. It can have vulnerable effects on economy and also can create trade imbalance. Malaysia is open economy in which US contributes more into their economy before Mr. President (Donald Trump) Presidency. The exports can be 90%. Malaysia have 20% of trade directly from the USA but after this situation their economy get affected most and thus companies market share also get decline from which unemployment rate get decline. This can tend to have global uncertainty and private sector investment can be decrease. All these factors have negative impact on country economy. If the exports decreases with that domestic demand comes down by 3.6%. this can have adverse impact on banks. Financial institute of country cut interest rates. So there can be potential to relief. 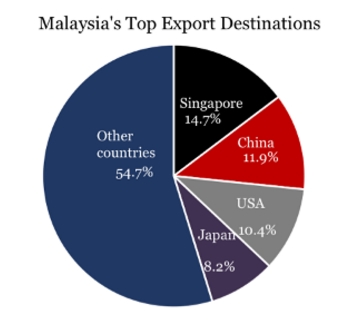 3.Increase traffic: This is another major issues which can decrease the growth rate of Malaysian economy. There are large numbaer of US companies which having various manufacturing facilities in Malaysia (Bond, Edmans and Goldstein, 2012). But recent Trump administration announced that they increase tariffs on China and other countries which can create a serious issue on the losing large number of employment (Challet, Marsili and Zhang, 2013).

Impact on stock and financial market:

1.Uncertainty in market: The another impact of Trump administration of the on the stock market of Malaysia. There are large number of amount invested in the stock market through FII investment. But recently the USA government is decided to rebuild their infrastructure which can attract such investor which can reducing the FII inflow (Edmans, Goldstein and Jiang, 2012). It can create uncertainty in the market which is not good for the both companies and economy. According to the latest data of there are 1.2 percent decline of Malaysian currency against US dollars. If these the export is continuously growing down as well as the domestic demand which can leads to increase dissatisfaction level of investor (Engelberg and Parsons, 2011).

2.Decrease in currency value: Malaysian ringgit assets become weak because it is a mixed bad of equity market as well as bind market where there is decline got measure in equity market with 1% but with stable bond market with a rate of 1.2%. This signifies that with the help of other countries their economic is not suffering so much deficient (Hillier, Grinblatt and Titman, 2011). But America is consider as one of the most trader with them. Thus Trump victory made a negative impact on Malaysian economy.

3. The pressure on forex market might get high. If trump gets the victory. By this most of investors shift to high quality trade. This can have positive impact on Malaysia economy. The environment of country have advantage from this policies. The economy exports of Malaysia, Singapore, Thailand can be impacted by US president trump victory (Longstaff, 2010). These countries can face adverse impact as global exports for these countries are 50% to 150% of country GDP. This can intend to give benefit to higher prices commodities like oil, gas and coal sector.