7 Life-Changing Autobiographies to Read At Least Once in Lifetime

Inspiring Autobiographies to Help You Achieve Your Dreams 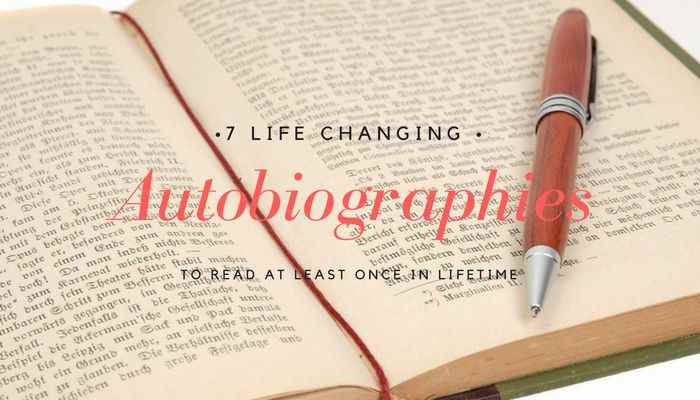 Autobiographies are regarded as one of the most life-changing and powerful literary forms and are as inspiring as the firsthand account of greatness. The fact that makes autobiographies interesting to read is that they enable readers to have a glimpse into the author’s life and learn about the hardships and challenges they came across. If you truly wish to understand what makes a person truly great and get the motivation to accomplish your goals, then take a look at some of the best autobiographies ever written.

“And as we let our own light shine, we unconsciously give other people permission to do the same. As we are liberated from our own fear, our presence automatically liberates others.”

Nelson Mandela is recognized as one of the most influential political leaders and revolutionaries in the world. His autobiography recounts his journey of growing up into a freedom fighter, surviving twenty-seven years in prison, and playing a significant role in molding up a new, democratic South Africa. It will also give you a deep understanding of Mandela’s perception of the anti-apartheid struggle of the South Africans.

“Hide not your talents, they for use were made,
What's a sundial in the shade?”

Benjamin Franklin, one of America’s founding fathers, wrote his biography from 1771 to 1790 that explains how a lower-middle class youth went on to become one of the most admired men in the world. Benjamin Franklin’s autobiography will make you aware of how he believed in the American Dream and determined the possibilities of life in the New World. This book also explores the idealism, intellectualism, and optimistic beliefs that prevailed in the 18th century.

3. The Diary of a Young Girl - Anne Frank

“I've found that there is always some beauty left -- in nature, sunshine, freedom, in yourself; these can all help you.”

The Diary of a Young Girl is not a usual autobiography, but it is a book of writings from the diary kept by a thirteen-year-old Jewish girl, Anne Frank while she was hiding for two years with her family when Nazis occupied the Netherlands. This book explores the hardships and challenges, such as hunger and boredom, and the constant fear of discovery and death they faced during their hideout. Anne Frank’s remarkable account is a compelling testament to human spirit among the horrors of war.

“So early in my life, I had learned that if you want something, you had better make some noise.”

This spiritual classic gives a deep insight into the underside of the 20th Century American life. It tells the extraordinary story of his life, from his miserable childhood to criminal teenage, and then his prominence as a national figure, world leader, activist, and fighters in the struggle for change in America.

5. I Know Why the Caged Bird Sings - Maya Angelou

“Words mean more than what is set down on paper. It takes the human voice to infuse them with shades of deeper meaning.”

Maya Angelou’s autobiography takes you on an emotional journey of a young girl who came across bitter experiences during her first seventeen years of life. It explores how her life changed after her parents separated, how she was sexually abused by her mother’s live-in boyfriend, and how she overcame her sufferings and distress. It also describes the struggle and racism that Black Americans faced during that time.

“He who would live must fight. He who doesn't wish to fight in this world, where permanent struggle is the law of life, has not the right to exist.”

This autobiographical book by Adolf Hitler highlights his political ideology and plans for Germany and explains why he wanted to eliminate Jews from the country. He started writing this book when he was in prison. It describes his childhood, his conflict with his father, his emergence as a political leader, and his sheer hatred of the Jews. This book will let you unravel the “other side” of one of the most influential German politicians and mass murderers.

7. On Writing: A Memoir of the Craft - Stephen King

“Description begins in the writer’s imagination, but should finish in the reader’s.”

This autobiography by one of the bestselling writers in the world depicts his personal life, his struggles, and experiences during pre-fame and post-fame, and all the things that make him the most remarkable storytellers in the modern American literature. The book is organized into five sections: C.V., What Writing Is, Toolbox, On Writing, and On Living: A Postscript. All these sections talk about different events that happened in his life and highlight his habits and convictions that helped him create some of the best work.

These were a few autobiographies that are considered as the masterpieces, but there are some more inspiring stories of famous people that you can include in your reading list. Some of them are The Story of My Experiments with Truth by Mahatma Gandhi, Chronicles, Vol 1 by Bob Dylan, Agatha Christie: An Autobiography by Agatha Christie, A Moveable Feast by Ernest Hemingway, Autobiography of Mark Twain by Mark Twain, Open: An Autobiography by Andre Agassi, and many others. Read them, and we bet you’ll start dreaming with open eyes!

If your academic work doesn’t spare you enough time to read books and do other activities, then you should seek writing help from us. The writers we have on board hold exceptional academic qualifications and are known for delivering unparalleled assignment writing services in the UK. Thousands of students could improve their grades and acquire in-depth knowledge of various topics with their assistance. So, don’t think anymore and approach our writing experts today!